Winner of the Blue Ink Award & National Latinx Playwriting Award
Alma crossed the border 17 years ago in search of the American Dream. Now, on the eve of her U.S.-born daughter Angel’s SAT, Alma believes all their sacrifices and hard work will pay off. There’s one problem – Angel has very different plans for her future. Told in real time, playwright Benjamin Benne’s Alma is a heartfelt and complex exploration of the immigrant generation and their first-generation children.

The matinee on Sunday, Oct 16 will be performed in English with Spanish subtitles visible on a screen. For any questions, please call (773) 654-3103. 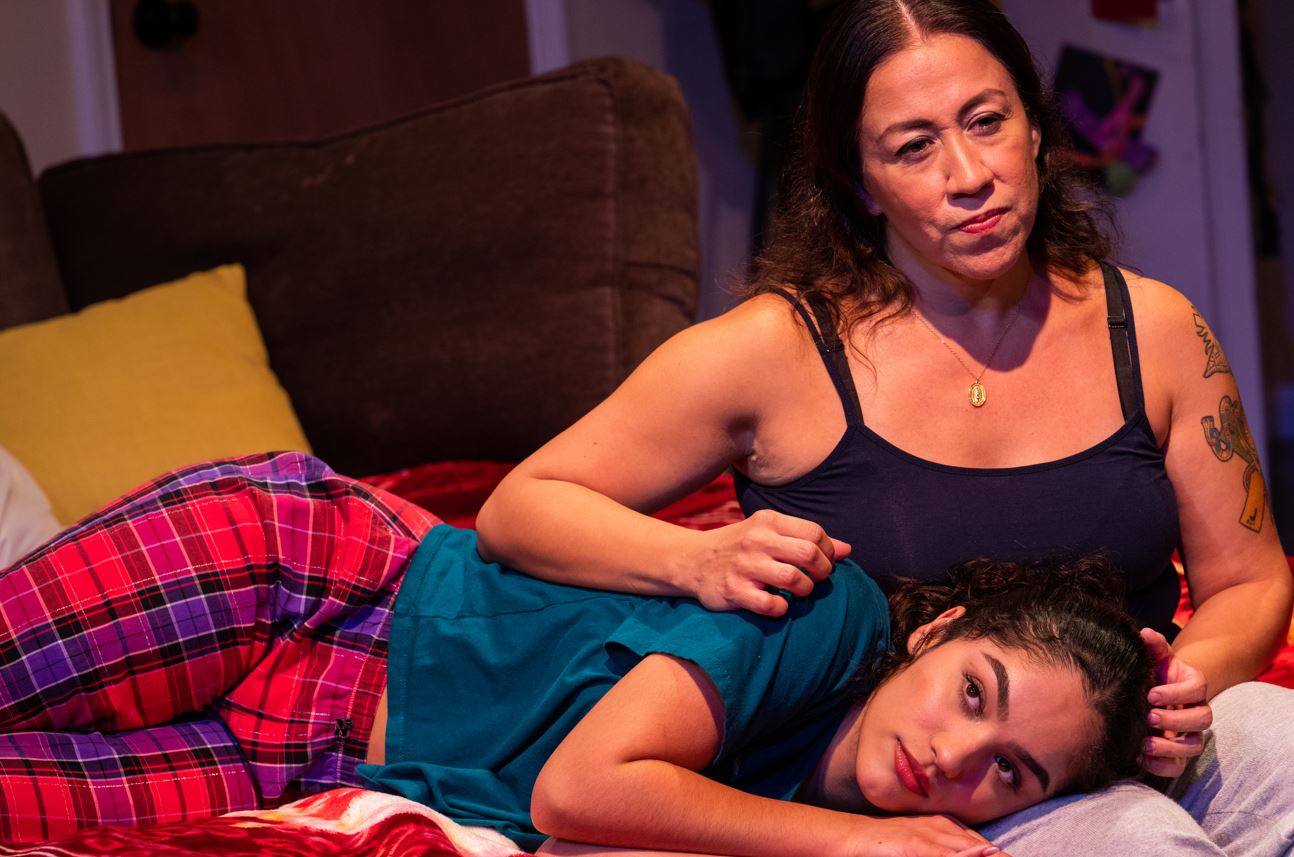 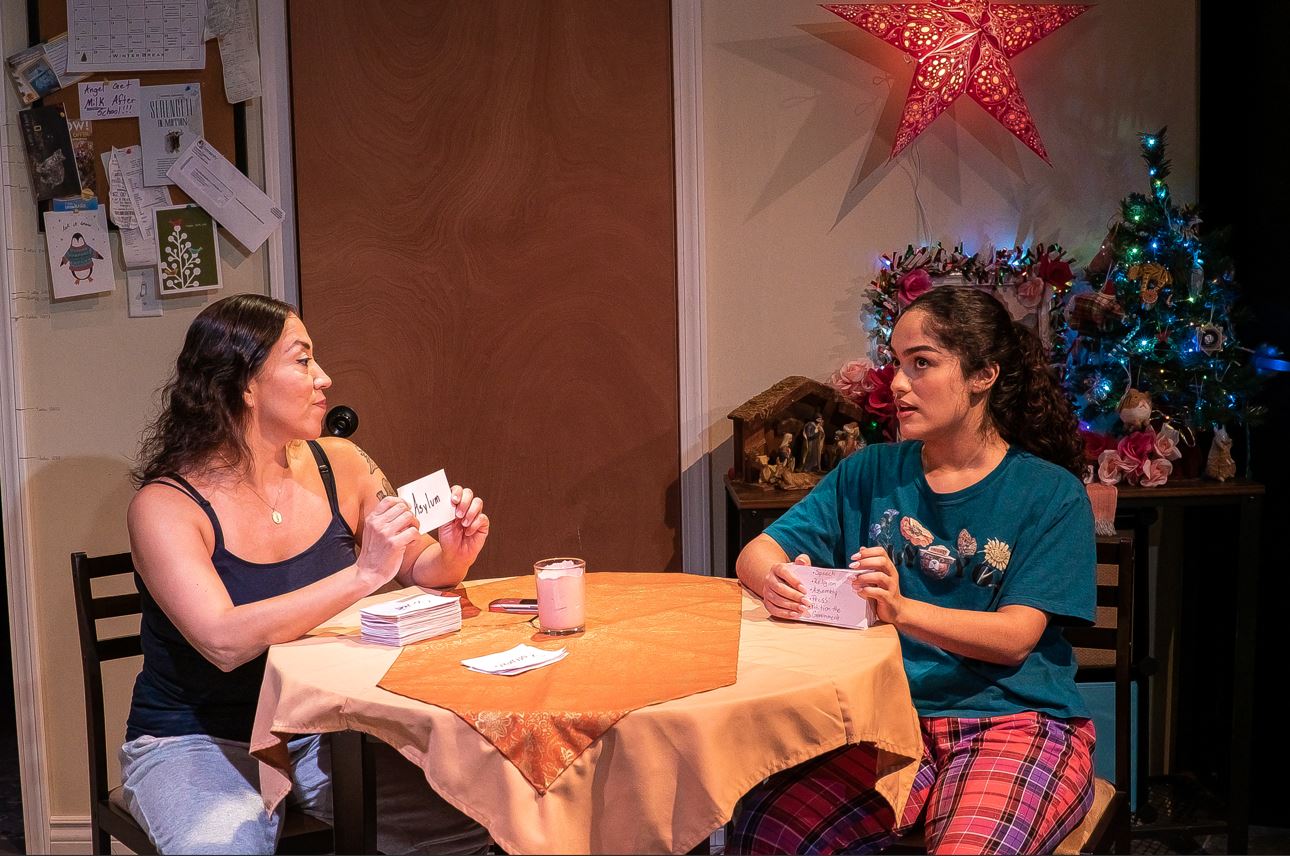 Photos by Jenn Udoni and videos provided by The Stage Channel.

“Moving world premiere [that is] not-to-be-missed. Praise must also be given to the production team who executed a seamless show.” – PicksInSix, read full review

“This is a big-hearted, high-caliber production…it shows just what storefront theater is capable of in terms of intimacy and impact.” – Newcity, read full review

“Powerful! This is a love story between a mother and her daughter, and that works in any language.” – Chicago Onstage, read full review

“Alma challenges misconceptions about immigration, the road to citizenship, and the impact it has on families across the country.” – Rescripted, read full review

“Deeply moving and important appeal to humanity and dream for a better life that we all can relate to on some level. This play grips at hearts and changes perspectives.” – Aaron W

“It is a beautiful production and such an important one.” – O.M.

“Witnessing the family life of people and a struggle I know intimately was moving in a way I didn’t expect. I wish everyone I know could see this stunning play.” – Leanna Castro

“Great set, storytelling, and acting. And I love the elephant symbolism in the dream!” – Gabriel Z 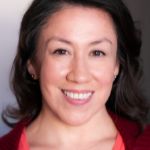 JAZMÍN CORONA she/her (Alma) is thrilled to be working with American Blues Theater! Some past Chicago theatre credits include: Hurricane Diane (Theater Wit); Zulema (Goodman/Sones de Mexico); Roe (Goodman Theatre); Shrew’d and Macbeth (First Folio Theatre); I’m Not Your Perfect Mexican Daughter and The Compass (u/s, Steppenwolf Theatre); 1776 (Porchlight Music Theatre); Women of 4G (Babes With Blades); A Work Of Art (Chicago Dramatists); Two Mile Hollow (First Floor Theater); Gender Breakdown (Collaboraction); Sherlock Holmes and the Case of the Christmas Goose (Raven Theatre). TV credits include: Chicago Fire (NBC). Dedicated with gratitude to Mamá, Papá, and all of the ancestors who took the risk so that I could be here today.

BRYANNA CIERA COLÓN she/her (Angel) is excited to make her American Blues Theater debut in ALMA as Angel. The Chicago based performer made her national tour debut in the hit holiday musical The Elf on The Shelf: A Christmas Musical (Ella) fresh out of high school. She then went on to do In The Heights (Yolanda, Nina US, Ensemble) at the Arts Center of Costal Carolina on Hilton Head Island right after. Some of her other credits include episodes in the critically acclaimed NBC TV series Chicago Fire and the FOX TV series The Big Leap. Bryanna is so grateful to be part of a project that will “mean something to people”. She is ready to tell this important story- something she believes “needs to be HEARD”. IG: @bryannacieracolon 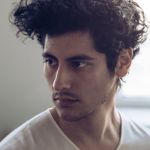 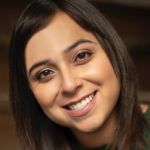 ANA VELAZQUEZ she/her (Director) is a proud Artistic Affiliate of American Blues Theater. She is a Mexican American director and teaching artist in her native Chicago. Her directing experience is deeply tied to new play development and is often in collaboration with playwrights exploring underrepresented stories. Her directing credits include A Los Angeles Mural for Wrights of Spring Festival at The Theatre School at DePaul; I Come From Arizona staged reading for Vittum Theater’s grand reopening at Adventure Stage Chicago; La Ofrenda at Adventure Stage Chicago; Alma for Blue Ink Festival at American Blues Theater; El Pico for A Night of New Works at Something Marvelous; Macha for Tutterow Fellows Showcase at Chicago Dramatists; Oak & Pallets for Peacebook at Collaboraction; Los Frikis for El Semillero at Victory Gardens Theater; Meet Juan(ito) Doe (co-directed) at Free Street Theater; Everybody Loves Big E for Our Chicago Project at Collaboraction; Art House and The Scream for Scrapbook 2017 at Chicago Dramatists; Epic Tales with FEMelanin for Kid’s Fringe 2016 and Raisin Puffs for Black Lives, Black Words at Black Ensemble Theatre. She received the 2018 Alta Award for Outstanding Director of Play for Meet Juan(ito) Doe (co-directed). Ana is a PlayMakers Laboratory company member. Her teaching artist experience includes Disney Musicals in Schools and PlayBuild Youth Intensive Program with Goodman Theatre; TimeLine South Living History Program with Timeline Theatre and Young Playwrights Festival with Pegasus Theatre. Ana recently completed her second residency with Teatro Comunal, a new youth program created through We the Many with Arts Midwest and The Honeywell Foundation in Wabash & North Manchester, Indiana. She received her BA in Theatre from the University of Illinois at Chicago.

TARA A. HOUSTON she/her (Scenic Design) is excited to be joining American Blues Theater for the first time.  She is Assistant Professor of Scenic Design at Louisiana State University and Associate Dean for Diversity, Equity, and Inclusion for the College of Music and Dramatic Arts.  Her work flourishes in collaborative environments that support intellectual and artistic risk taking.  As an educator, she endeavors to support those environments for her students.  Tara’s scenic design work has been featured at Cara Mía Theatre, Skylight Music Theatre, Children’s Theatre of Madison, Swine Palace Theatre, and others.  She is on the Board of Directors for USITT and Steering Committee for the Latinx Theatre Commons.  Tara is particularly proud of her work with La Gente: The Latine Theatre Production Network.

LILY WALLS she/her (Costume Design) is a proud Artistic Affiliate of American Blues Theater. She is over the moon to be back at American Blues costuming this beautiful production, her sixth with the company! Other Chicago companies she has worked with have included Haven (Science Fiction/Double Feature, Titus Andronicus), Midsummer Flight (Twelfth Night, A Midsummer Night’s Dream), Akvavit (Bad Girls, Rising Temperatures, Family Drama) and City Lit (Hound of the Baskervilles). She would like to thank her friends, family and community for the support and renewal they give, her husband Michael for everything, and her new baby August for being the best.

VERITY NEELY she/her (Props Design) is a Properties Designer from Central Wisconsin. She has recently graduated from the University of Wisconsin – Stevens Point, and has been able to work on musicals, plays, and dance. Her most recent work was with American Blues on their production of Fences at Theater Wit in July. In the last few years, Verity has had the opportunity to work with NewArts in Connecticut, as well as an up and coming dance company: Sock Opera Dance in Wisconsin. She greatly enjoys the theatrical world and how we are able to create meaningful, as well as fun works that not only move the audience but the actors and designers that get the opportunity to see them. She loves helping create a space in which anyone who enters, can escape their reality for a moment and be entertained and captivated.

ANA MARIA CAMPOY she/her (Spanish translations) is a first-generation Chicana, theatre artist, educator, and advocate based in Seattle. As an arts educator and theatre artist she has worked with Olympia Family Theatre, Seattle Repertory Theatre, Pacific Northwest Ballet, Book-It Repertory Theatre, Seattle Children’s Theatre, Seattle Shakespeare Company, Village Theatre, ArtsImpact’s Voices from the Fields, and Oregon Shakespeare Festival’s FUERTE Festival. One of her most cherished acting roles includes Catherine in a bilingual adaptation of David Auburn’s Proof, which she also produced and translated alongside director Arlene Martínez-Vázquez, and is now under consideration for publication. She has toured nationally in Living Voices’s solo show, La Causa. She’s developed multiple bilingual scripts for Seattle Shakespeare’s Touring Productions such as: Romeo y Julieta, The Taming of the Shrew, Twelfth Night, Macbeth, and Hamlet, the latter two she also directed. She continues to collaborate with Seattle Shakespeare Company as Associate Artist and is proud to be a Board Member for Sound Theatre Company. In addition to her work within the arts, she founded and now runs the volunteer collective, WashMasks Mutual Aid to provide PPE, support, and advocacy for migrant and seasonal farm workers and their families during throughout the pandemic (www.washmasks.org; @washmasks on Instagram). Deep gratitude and joy to the entire team.

MANUEL ORTIZ he/him (Technical Director) is a proud Artistic Affiliate of American Blues Theater. He is thrilled to be working with American Blues theater again after having Technical Directed Fences, The Spitfire Grill, It’s a Wonderful Life: Live in Chicago!, Five Presidents, and Roan @ the Gates. Manuel received his BFA in Acting at DePaul University’s Theater School and expanded his love of theater as a Technical Director, Scenic Designer, Props Master, Scenic Charge and many more hats! After teaching for a number of years, Manuel’s artistic mission has evolved to utilize theater as a gateway to explore the wonders and implications of a creative mindset on and off stage. Manuel hopes to better the theater community through education and mentorship and is blessed and humbled that American Blues’ goals of bettering our thriving artistic community align!

SHANDEE VAUGHAN she/her (Stage Manager and Production Manager) is a proud Artistic Affiliate of American Blues Theater and is excited to be working with this incredible team for Alma! Blues credits: Fences, Stand Up if You’re Here Tonight, Roan @ the Gates, Five Presidents, The Spitfire Grill, The Absolute Brightness of Leonard Pelkey, On Clover Road, It’s a Wonderful Life: Live in Chicago (2016 & 2018-2021), Flyin’ West, The Buddy Holly Story, The Columnist, and Little Shop of Horrors. Other recent Chicago credits include: In Every Generation (Victory Gardens), Time Is On Our Side (About Face Theatre), Deathscribe X (WildClaw Theatre), Night in Alachua County (WildClaw Theatre), and The Woman in Black (WildClaw Theatre). Shandee is a production manager and stage manager from Arizona. She is a proud member of Actors’ Equity Association. 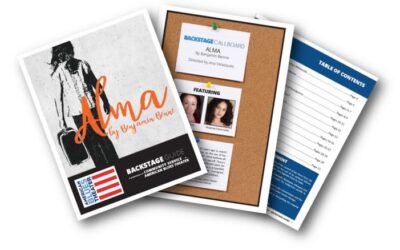 Inside look at ALMA – read interviews, see designs, & learn more about the production.

END_OF_DOCUMENT_TOKEN_TO_BE_REPLACED 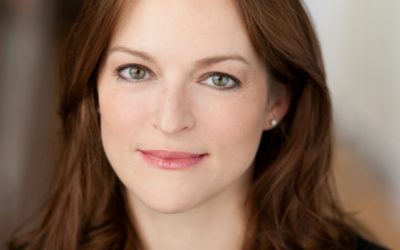 You only needed to read a few pages to feel the power of this story. His script rolled down the submission pile in an avalanche of “yes” from all our readers.