What is an Ensemble theater?

An Ensemble theater is a group of individuals dedicated to collaborative creation and committed to consistently working together over years to develop a distinctive body of work and practices. Ensemble members, both artists and administrators, are empowered to help shape their theater’s artistic direction and organizational structure.

How did you get your name – American Blues Theater?

Legend has it: our Founders were drinking at a bar, discussing the difficulty of getting paid employment as artists. They took action and created an Ensemble theater for the blue-collar worker.

Do you hire outside your Ensemble?

Yes! For over 30 years, we’ve used incredible talent outside our Ensemble and Artistic Affiliates. We hire both union and non-union artists.

Are you an Equity producing theater? What CAT contract do you use?

Weren’t you called “ATC” at some point?

Where are the offices now?

Where are the performances?

Do you perform a holiday radio play annually?

Yes! During 2002 & 2003, our Ensemble and former Artistic Director, Damon Kiely, presented staged-readings of It’s a Wonderful Life. In 2004, the American Blues family expanded the event to a fully-staged production of Joe Landry’s adaptation, directed by Ensemble member Marty Higginbotham.

In the years that followed, Higginbotham created a live-radio experience for audience members. Dramaturgical research and attention to detail were paramount to our adaptations. Higginbotham’s directorial elements included adding audio grams, lobby refreshments of cookies and milk, dramatized scenes from Capra’s film, a pre-show and singing of holiday carols. From 2009 – 2012, we presented this story with vintage projections at the Victory Gardens Biograph Theater and added the Soldier Spotlight to honor military personnel. From 2013-2016, we presented It’s a Wonderful Life: Live in Chicago! at the Greenhouse Theater Center.  Since 2017, we’ve presented Chicago’s holiday favorite at Stage 773.

Since 2015, Artistic Director Gwendolyn Whiteside has directed this Chicago staple. To date, over 50,000 patrons have earned their wings! 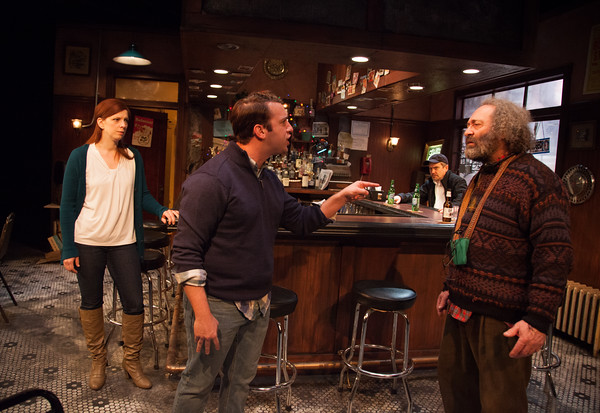