STAND UP IF YOU’RE HERE TONIGHT

“You’ve tried everything. Yoga. Acupuncture. Therapy. You floated in salt water in the pitch black dark. You juiced, you cleansed, you journaled, you cut, you volunteered. You got a mattress that fitted itself to your fetal form. You ate only RINDS for three days and nights. You reached out, you looked within. You have tried. And yet here you are.

So begins a new play by Olivier-nominated playwright John Kolvenbach in its Chicago premiere. Broadway’s Jim Ortlieb* delivers a tour-de-force performance as a man desperate for connection, bent by isolation, and deeply in love with the audience itself. To learn more, read our Artistic Director’s note and Backstage Guide. 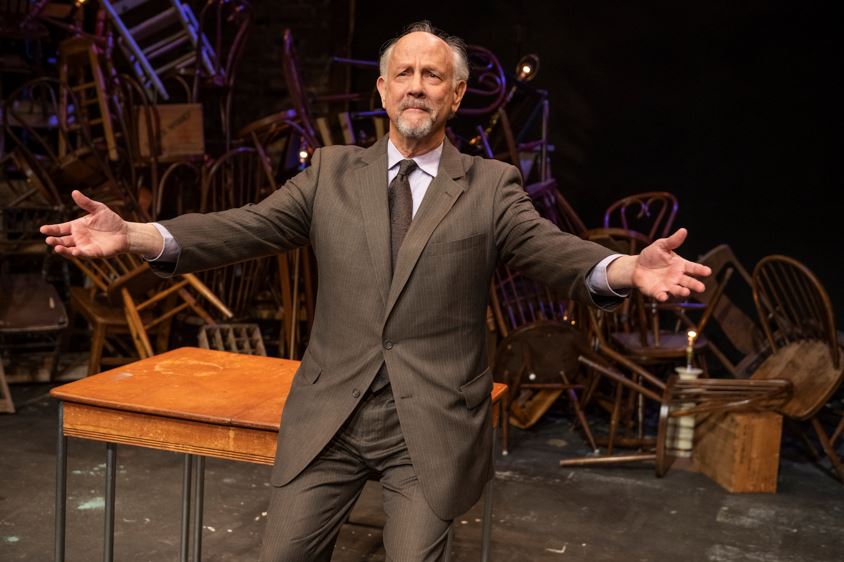 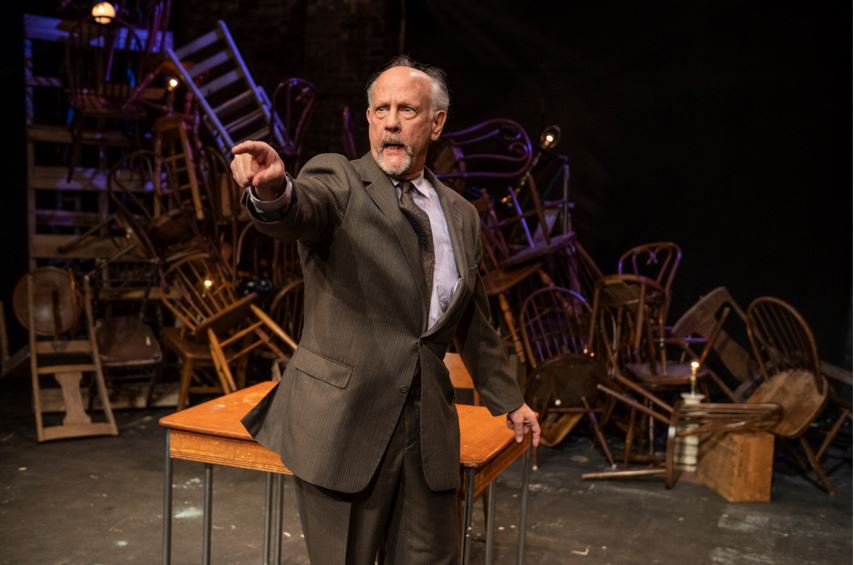 John Kolvenbach’s “Stand Up” is, to say the least, an interactive show. (The title can be taken literally.) This 65-minute attraction, likely to appeal to fans of the neo-absurdist likes of Will Eno but less ephemeral, does not call on volunteers in order to do shtick with the audience. Rather, it attempts to genuinely interrogate what it means to come back, live, to the theater when, as Ortlieb’s character notes at the beginning, there is now the “siren song of streaming” with which to contend, along with other good reasons to stay home.

…“You arranged yourselves,” he says, admiringly, before gently leading his perplexed audience in, well, I’d say it’s a series of exercises in how to be out in public again, ready to receive art. This one won’t be for all tastes, but I admired how well it confronts the mass neuroses of the moment…Ortlieb is a warm, even an encouraging presence.

There is more than a touch of genius on display in the American Blues Theater’s production of “Stand Up If You’re Here Tonight.” And that genius must be equally credited to the conceptual magic of playwright/director John Kolvenbach and to Jim Ortlieb, a veteran Chicago actor with a slew of Broadway, film and TV credits, whose wholly riveting performance as the universally named Man is simply phenomenal. A true tour de force turn.

Jim Ortlieb gives a dynamic, charismatic, often sleight-of-hand performance as an unnamed guru making a direct appeal to the intimately spaced audience: he can offer us the spiritual peace we seek, if only we follow along.

The plot of this hour-long presentation is minimal, although a tiny fragment of a story begins to emerge toward the end. Suffice it to say this is fascinating piece of participation theatre that’s the perfect antidote for being shut-in for so long. Although mask-wearing and proof of vaccination against Covid are required, Jim Ortlieb does a crackerjack job of leading viewers out of their doldrums and everyday problems, while immersing everyone in a collaborative community experience. It’s a refreshing piece of theatre that’s creative, unique and an evening that audiences will never forget. HIGHLY RECOMMENDED

If you’ve been waiting to return to the theater for that show that not only tickles you with a positive message but also touches you with sincerity and genius, your wait is over. You must see “Stand Up If You’re Here Tonight.” There are no quick-fixes to finding happiness, but just showing up, in whatever mental and physical state we’re in, makes us all victorious!

Ortlieb’s is a mixture of Monty Python and George Carlin, providing a surreal, observational comedy where he enlisted the participation of his audience to lure them into the fun. His timely sarcastic wit psychologically mesmerizes you to focus on his every word as he twists your mind into seeing yourself unburdened from what holds you captive. And for a moment, or at least 60 minutes, you feel free.

Around the Town Chicago

In the Chicago premiere of “Stand Up If You’re Here Tonight”, a masterpiece written and directed by John Kolvenbach, we get to look into the mind of our “leader”called simply “Man” ( an incredible performance by Jim Ortlieb).

“It is a special show. I felt very present and in the moment.” – Michael C

JOHN KOLVENBACH he/him (playwright / director) On the West End: Love Song (Olivier nomination, Best New Comedy, directed by John Crowley) and On an Average Day (with Woody Harrelson and Kyle MacLachlan, also directed by Mr. Crowley.) Love Song premiered at Steppenwolf in 2006, directed by Austin Pendelton. It  has been produced in New York, Zurich, Melbourne, Sydney, Wellington, Seoul and Rome. There have been over fifty productions in the U.S. Average Day was produced in Los Angeles by VS. (with Johnny Clark and Stef Tovar) and in Chicago by VS. and Route 66. Average Day has been produced in Tel Aviv, Buenos Aires, and Lisbon. Goldfish premiered at South Coast Repertory, then at the Magic Theatre in San Francisco, directed by Loretta Greco. The play was done in repertory with Mrs. Whitney, which was directed by the author.  Most recently, Reel to Reel received its premiere at the Magic. Sister Play received its premier at The Harbor Stage Company and at the Magic, both productions directed by the author. Stand Up If You’re Here Tonight opened in the summer of 2021 at The Harbor Stage and, simultaneously, in Los Angeles with VS. and Circle X. Other plays include: Fabuloso,  (Premiered at WHAT, subsequent productions in San Juan and Zurich, in Spanish and Swiss German) Bank Job (Amphibian Stages) and Marriage Play or Half ‘n Half ‘n Half (Merrimack Rep.) Film: Clear Winter Noon, an original screenplay, was selected for the Blacklist in 2008.

JIM ORTLIEB he/him (Man) is a proud Artistic Affiliate of American Blues Theater and a member of the rare breed of middle-class actors.  After studying with William Esper and Kathryn Gately at Rutgers University, Jim was invited by Lois Hall to teach in Chicago at Lois Hall Studio, a mainstay of professional studios in the 1980’s. It was because of Lois that Jim Ortlieb was welcomed into the Chicago theater community.  When she retired, Jim renamed the school, Chicago Actors Project, which remained vibrant until 1989. During the 80’s and onward, Jim acted with many Chicago theaters, including The Goodman (Candide), Pheasant Run (Sorrows of Stephen), Organic (M the Murderer), Wisdom Bridge (Only Kidding), Northlight (All in the Timing), and Steppenwolf (Picasso at the Lapine Agile, The Man Who Came to Dinner), Touchstone (Racing Demon, Indiscretions), Gare St. Lazare Players (Hughie), Bailiwick (An Uncertain Hour by Nick Patricca) and as a member of American Blues Theater he played the title role in Scapin. Ortlieb’s new found family of Chicago artists lead him all over the world. When Bob Meyer of the Gare St. Lazare Players moved to Europe to spend more time with his son, Charlie, Jim traveled there to collaborate on numerous productions with Bob and the extensive group of expatriated English speaking artists in Paris, Ireland, and England such as Hughie, The Homecoming, Faith Healer, and Requiem for a Heavyweight.  Malcolm Ewen brought Jim to the Weston Playhouse in Vermont where he did Guys and Dolls, The Mikado, Candide, and Tartuffe. In the midst of the IATSE strike in 1999, Jim, his wife and two children moved to Los Angeles where they have lived ever since.  Other acting credits include on Broadway in Aaron Sorkin’s The Farnsworth Invention, Of Mice and Men with James Franco and Chris O’Dowd directed by Anna Shapiro, and Guys and Dolls with Lauren Graham and Oliver Platt.  The 1st National Tour of Billy Elliot the musical for two years in Chicago and in Toronto. In 2012 Ortlieb was nominated for an IRNE award for his lead performance in Half ’n Half ’n Half (now titled The Marriage Play) by John Kolvenbach. That relationship continues today with Stand Up If You’re Here Tonight! His film and TV credits include: Drunkboat with John Malkovich and John Goodman and directed by Bob Meyer, Flatliners, Home Alone, A Mighty Wind, Contagion, Chain Reaction, The Onion Movie, Latter Days, Bug, and Magnolia.  His television credits include Station 19, American Horror Story, 911: Lone Star, How to Get Away With Murder, Grey’s Anatomy, West Wing, The Closer, Roswell, Six Feet Under, Gabriel’s Fire, and The Shield. Jim has done more than 75 commercials and voiceovers in his 45 years as an actor all of which has helped pay the bills. Both of Jim’s daughters, Helena and Grainne, returned to Chicago where they both graduated from DePaul University.  Grainne (grahn-yah) Ortlieb, a Theatre School grad, remains in Chicago with the community the whole family calls home.

GWENDOLYN WHITESIDE she/her (Artistic Director) is a proud Ensemble member of American Blues Theater and has served as Artistic Director since 2010.  In her tenure, she created the nationally-recognized Blue Ink Award and new work development program, implemented community service into the company’s mission, and adapted the arts education program for Chicago Public Schools serving nearly 4,000 students annually. She led American Blues through its reorganization in 2009, building the operational budget from zero to $1 million. She secured the company’s first-ever operating reserve and endowment. Whiteside served on numerous panels for the National Endowment for the Arts and sat on the Board of Directors for Network of Ensemble Theaters and League of Chicago Theatres. She’s a graduate of Northwestern University (BS), The School of the Art Institute of Chicago (MFA), and a Kellogg Executive Scholar in Nonprofit management (Kellogg School of Management, Northwestern University). As a producer, she’s received 14 Joseph Jefferson nominations or awards. As an actress, she’s received 5 Joseph Jefferson Awards, Citations, and nominations; 2 After Dark Awards; and 1 Broadway World Chicago Award.

MICHAEL TRUDEAU he/him (Scenic/Lighting Design; Technical Director) is a proud Artistic Affiliate of American Blues Theater and is thrilled to be working with Blues again.  Past Blues credits include Technical Director for It’s a Wonderful Life: Live in Chicago! (2015-2017, 2021), Yankee Tavern, Little Shop of Horrors, and Side Man, among others. Outside of American Blues, he works full time at Northwestern University as the Lighting and Sound Technician for the theater department, and is also the Master Electrician at the University of Illinois at Chicago.

SHANDEE VAUGHAN she/her (Production & Stage Manager) is a proud Artistic Affiliate of American Blues Theater. Blues credits: Roan @ the Gates, Five Presidents, The Spitfire Grill, The Absolute Brightness of Leonard Pelkey, On Clover Road, It’s a Wonderful Life: Live in Chicago (2016 & 2018-2021), Flyin’ West, The Buddy Holly Story, The Columnist, and Little Shop of Horrors. Other recent Chicago credits include: Time Is On Our Side (About Face Theatre), Deathscribe X (WildClaw Theatre), Night in Alachua County (WildClaw Theatre), and The Woman in Black (WildClaw Theatre). Shandee is a proud member of Actors’ Equity Association.

RACHEL WEST she/her (Master Electrician) is a proud Artistic Affiliate of American Blues Theater. She last worked as Asst Lighting Designer & Master Electrician on It’s a Wonderful Life! She has been serving as the Master Electrician for American Blues since 2018. Rachel is the Lighting Supervisor for Porchlight Music Theatre where she recently designed Nunsense as part of their Revisits series of lost musicals. She works with The Black Ensemble Theater, Mercury Theater, MCA Chicago, Actors Gymnasium and volunteers with the Maine-Niles Association of Special Recreation teaching theater to individuals with special needs. She is a Chicago-area native and a graduate of Boston University School of Theatre.

MORE INFORMATION ON STAND UP IF YOU’RE HERE TONIGHT 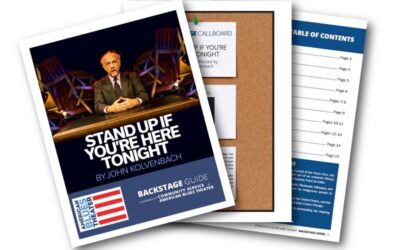 Inside look at STAND UP IF YOU’RE HERE TONIGHT – read interviews, see designs, & learn more about the production.

END_OF_DOCUMENT_TOKEN_TO_BE_REPLACED 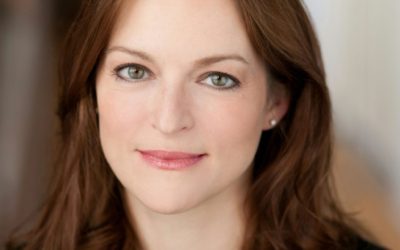 Read the AD note for STAND UP IF YOU’RE HERE TONIGHT.