Buy tickets to the staged-reading of 2016 Blue Ink Playwriting Award script The Wind and the Breeze. 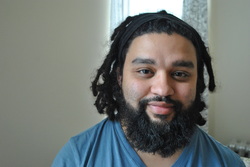 Chicago, IL– American Blues Theater, Chicago’s second oldest Equity Ensemble, under the continued leadership of Producing Artistic Director Gwendolyn Whiteside, has named Nathan Alan Davis the winner of the 2016 National Blue Ink Playwriting Award. Davis’ play, The Wind and the Breeze, was selected from a pool 449 submissions. As part of the award, Davis receives a $1000 cash prize and the opportunity to further develop his script with American Blues Theater. Lisa Portes will direct a staged reading of The Wind and the Breeze on April 10, 2016 at 2:00pm at the Greenhouse Theater Center, 2257 N Lincoln Ave.

“I am thrilled to receive the Blue Ink Playwriting Award, most especially for this play which is a Chicago play at its heart,” said Nathan Alan Davis. “The first draft of The Wind and the Breeze was written while I was still living in Chicago, and I greatly look forward to sharing it with this vibrant theatre community that still, in so many ways, feels like home.”

“This year’s competition brought incredible submissions from all over the world, and we’re honored to announce Nathan Alan Davis as the 2016 winner,” notes Producing Artistic Director Gwendolyn Whiteside. “Nathan’s writing is both fresh and resonant, and his ability to blend edgy, sharp language with lyrical poetry stood out to us. We’re thrilled to work the Nathan to further develop The Wind and the Breeze.”

The Wind and the Breeze is the story of Sam – the legendary, undisputed, greatest emcee in Rockford, IL—who has defiantly staked out a spot on a downtown bridge in the dead of winter, where he finally finds himself challenged to a battle he can’t win. The Wind and the Breeze explores the politics of place, the unspoken expectations of friendship, and what happens when we choose to stand our ground on shifting sands.

About Nathan Alan Davis
Nathan Alan Davis is a playwright from the Midwest, now based in NYC where he holds fellowships at Julliard and New York Theatre Workshop. His play Dontrell, Who Kissed the Sea received a 2015 Rolling World Premiere and was awarded a Steinberg/ATCA New Play Citation. Other plays include The Wind and the Breeze, The Art of Bowing and his most recent project, The Refugee Plays trilogy. His work has been produced and developed with New York Theatre Workshop, McCarter Theatre, Baltimore Center Stage, New Neighborhood, Theater Alliance, Cleveland Public Theatre, Skylight Theatre, Lower Depth Theatre Ensemble, Phoenix Theatre, Oregon Contemporary Theatre, Chicago Dramatists, the Kennedy Center, the Source Festival and the New Harmony Project. He has taught playwriting at Indiana University Bloomington, Indiana Repertory Theatre’s summer conservatory, MCVTS School of the Arts (NJ) and the New South Young Playwrights Festival (Atlanta). He received his MFA from Indiana University and BFA from the University of Illinois. He lives in uptown Manhattan with his wife, Elizabeth, and three daughters.

Each year American Blues Theater accepts worldwide submissions of original, unpublished full-length plays. The winning play is selected by Producing Artistic Director Gwendolyn Whiteside and the theater’s Ensemble. The playwright receives a monetary prize of $1,000 and a developmental workshop or staged reading at American Blues Theater in Chicago.

Submissions for the 2017 Blue Ink Playwriting Award open July 1, 2016. All submissions must be received by American Blues Theater by August 31, 2016 at 11:59pm. Playwrights may only submit one (1) manuscript each year for consideration.

Award: Nathan Alan Davis  (The Wind and the Breeze)