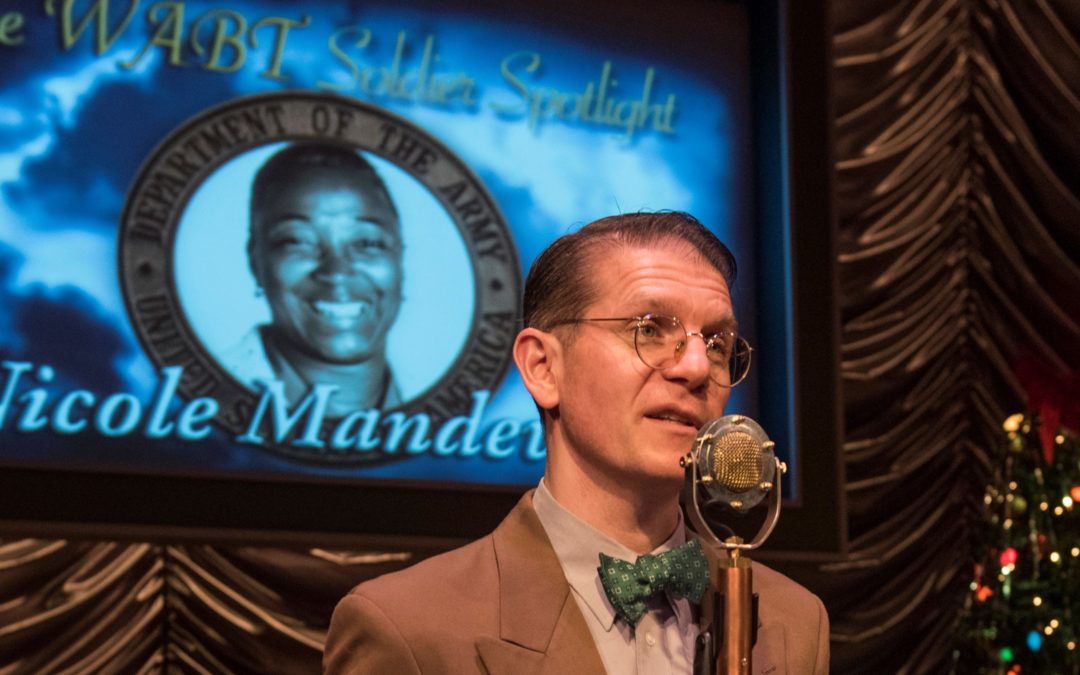 Nominate your beloved active or Veteran military personnel, including ROTC, for a “Soldier Spotlight” during our 2019 It’s a Wonderful Life: Live in Chicago!

During each performance, we honor one service person with a short personal tribute, a projected photo, and two (2) complimentary tickets.  This makes for an incredible holiday present to your loved one and family.

Submissions should be sent to American Blues Theater.  Hurry!  There are limited spots available for the 2019 production. Neither you or your nominee must be present to receive the spotlight.  For more information, contact Elyse Dolan at ElyseD@AmericanBluesTheater.com.

Gary J Vasquez, United States Army
SFC Gary J Vasquez was a member of the 7th Special Forces Group of the United States Army.
He was killed in action in Afghanistan at the age of 33.
This message if from his family:
Loyal friend, husband, brother, son.
You are remembered everyday-by your family who would give anything to have you back,
by your brothers in arms who must pick up where you left off,
by every vet who has walked a mile in your boots,
by the kids on the side of the road saluting.

Lawrence McMahon, United States Army
Lawrence McMahon served as a sergeant in the United States army during World War I.
After the war he remained active in many organizations including the Office of Civilian Defense, The American National Red Cross, and was a 47 year member of the American Legion.
As a 40-year employee of Illinois Bell, he was honored with membership in the Telephone Pioneers of America, and installed all the telephones in the 1933 Century of Progress World’s Fair.
He is honored today by his daughter Barbara.

David J. Ames, United States Navy
“David,
It’s cold here today.  The leaves have all fallen…it is that time of year again.  The Bears are having a rough start and Mike Singletary announced his retirement.  On the bright side, the Rockets won the homecoming game!  We missed you at Thanksgiving.  I will cook you the biggest turkey dinner in the world when you come home! Please be safe, I love you so much.
Love,
Mama”

Ernie Nieves, United States Army
Army Sergeant Ernie Nieves is a devoted member of the United States Army Recruiting Command currently stationed at the Chicago North Side Center.  Nothing describes SGT Nieves more than family. He and his wife, Lourdes, a 15 year veteran of the Chicago Police Department, have a combined 8 children and 2 grandchildren. They have the honor of having two of their sons currently serving on Active Duty. This honor drives the train in his life to help shape and change the lives of our youth.

Bill Crist
Bill Crist has been a member of the National Veterans Art Museum family for years. He has been integral in the development of one of our most popular ongoing exhibits, a courageous liaison to student groups, and a prolific artist in the permanent collection.
Thank you, Bill, for your service, invaluable contributions and friendship.
–Levi and your friends at the National Veterans Art Museum

SSG Alexis Hitzeroth, United States Army National Guard
SSG Hitzeroth was deployed in 2008-2009 to Afghanistan as a member of the 33rd BCT, serving in Operation Enduring freedom in numerous combat related missions.
Now back state side, SSG Hitzeroth serves as a Squad Leader within the Decontamination 1st Platoon at the 135Th Chemical Company.  SSG Hitzeroth also serves as a Unit Event Coordinator and has taken a very active role in informational readiness amongst her fellow Soldiers.
The Army National Guard, along with the 135th Chemical Company is extremely honored to have the exceptional and unwavering discipline of SSG Alexis Hitzeroth.
-135th Chemical Company