AN EVENING OF LEGENDS 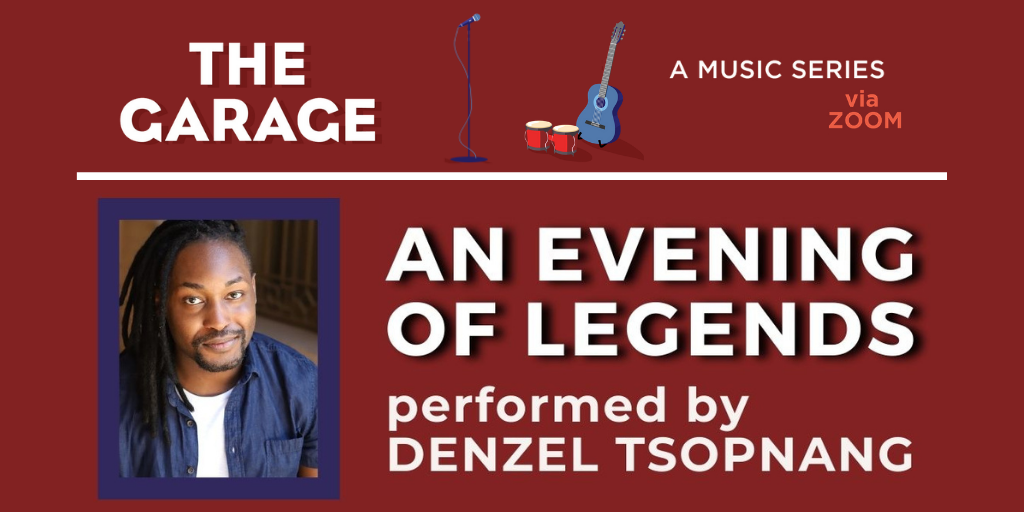 SYNOPSIS: Join award-winning Artistic Affiliate Denzel Tsopnang for an unforgettable 60 minute tribute concert to America’s 1950s/60s legends of Rhythm & Blues, Jazz, and Rock & Roll. Featuring incredible music from icon Sammy Davis Jr, “the most popular black female recording artist of the 50s” Dinah Washington, “The High Priestess of Soul” Nina Simone, and much more. Don’t miss this special concert from the comforts of your own home.

The Garage’s music series features the musical talents of our Ensemble Members and Artistic Affiliates and will run monthly for the duration of the COVID-19 pandemic. Following every concert, stay in our virtual space to meet the artists.

You may reserve tickets HERE or call (773) 654-3103 until Friday, June 18 @ 3:00 PM Central. Suggested donation is $25 or pay-what-you-can. Your Zoom link will be sent the day before the reading and again 1 hour before the reading starts. For any questions, if you didn’t receive your Zoom link, or to get on the waitlist in the event of a sold out performance, contact us at BoxOffice@AmericanBluesTheater.com.

Keys 4/4 Kids – a charitable organization that repurposes used, donated pianos in ways that promote a love of music in our community.

DENZEL TSOPNANG he/him (Performer) is a proud Artistic Affiliate of American Blues Theater where he was last seen in Five Presidents as Agent Kirby. Raised in the Batavia, IL and brought up in Cameroon, Denzel found himself in Decatur, IL with a BFA in Musical Theatre from Millikin University. He made his Chicago debut with Griffin Theatre’s acclaimed production of Balm in Gilead and since then, has had the pleasure of working with theatres such as Peninsula Players, Light Opera (Music) Theatre Works, Chicago Dramatists, BoHo Theatre, Court Theatre, Drury Lane Oakbrook and The Marriott Lincolnshire. Some of his favorite credits include: Mr. Bones in the Chicago premiere and Jeff Award Winning production of The Scottsboro Boys (Porchlight Music Theatre), and then Mr. Tambo in MTI’s first National Pilot of The Scottsboro Boys,  Coalhouse Walker Jr in Ragtime (Griffin Theatre); for which he was nominated for Best Principal Actor in a Musical, Apollo Singer in American Blues Theater’s hit The Buddy Holly Story, and Bernard in Windy City Playhouse’s award-winning production of Boys in the Band. He was also a featured soloist in Porchlight Music Theatre’s  2017 Icons Gala in honor of Lonny Price and the late Rachel Rockwell. Denzel is based in Chicago and is a teaching artist with The Joyful Actor Studio.

ZACHARY STEVENSON he/him (Music Director) is a proud Artistic Affiliate of American Blues Theater. He is an award-winning actor, musician and writer. Originally from Vancouver Island, Canada, Zachary has been coined a “dead ringer for dead singers” by the Victoria Times Colonist for his portrayals of Buddy Holly, Hank Williams, Phil Ochs and roles based on Elvis and Jerry Lee Lewis. In 2018, Zachary won the Jeff Award in Chicago for Outstanding Performance by an Actor in a Leading Role (Musical) for The Buddy Holly Story, a role he’s honed in more than a dozen productions across Canada and the United States. Other acting highlights include Million Dollar Quartet, Hair, Urinetown, Assassins, and Company.  Zachary has produced and recorded five independent albums and tours frequently as a musician. He is also active as a music director on productions such as Ring of Fire and Million Dollar Quartet, American Idiot (upcoming). He is currently writing an American Blues commissioned solo show based on the life of folksinger, Phil Ochs.

SHANDEE VAUGHAN she/her (stage manager) is a proud Artistic Affiliate of American Blues Theater and happy as always to be back with her Blues family! Blues credits: Roan @ the Gates, Five Presidents, The Spitfire Grill,The Absolute Brightness of Leonard Pelkey, On Clover Road, It’s a Wonderful Life: Live in Chicago (2016 & 2018-2020), Flyin’ West, The Buddy Holly Story, The Columnist, and Little Shop of Horrors. Other recent Chicago credits include: Time Is On Our Side (About Face Theatre), Deathscribe X (WildClaw Theatre), Night in Alachua County (WildClaw Theatre), and The Woman in Black (WildClaw Theatre). Shandee is a proud member of Actors’ Equity Association.

We wish to express our gratitude to the Performers’ Unions (Actors’ Equity Association, American Guild of Musical Artists, American Guild of Variety Artists, SAG-AFTRA) through Theatre Authority, Inc. for their cooperation in permitting the Artists to appear on this program.