DAYS OF DECISION – the music of Phil Ochs 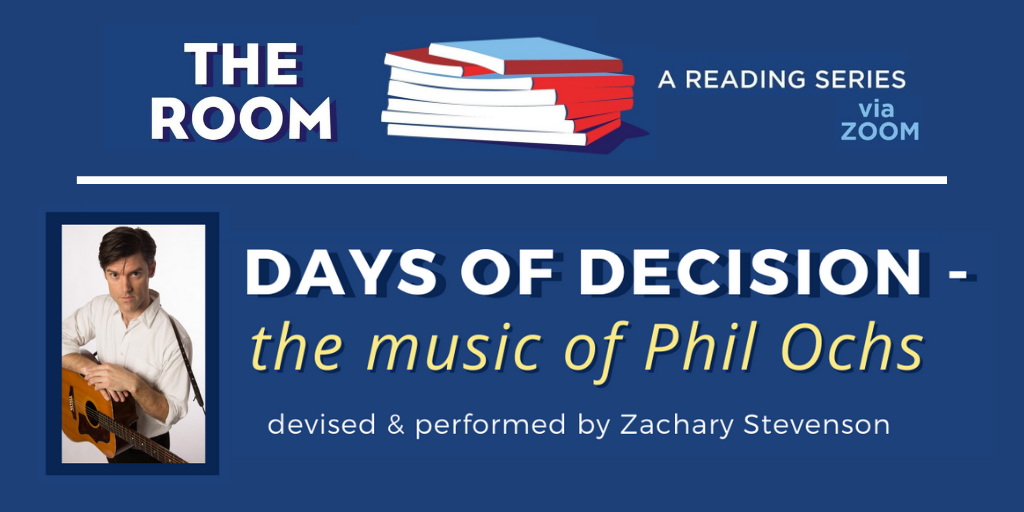 SYNOPSIS: Join us for a virtual Phil Ochs tribute concert performed by award-winning Artistic Affiliate Zachary Stevenson (“Buddy” in The Buddy Holly Story). Featuring powerful songs and incredible stories, Zach reveals his personal journey into the music of this legendary folk singer who stood for freedom, equality, and social justice.

Join us for a powerful, live concert on Zoom. Following the 60-minute performance, stay in our virtual space for a group discussion and share actions you can take. For more information, please read our Backstage Guide in your browser or download pdf.

You may reserve tickets here or call (773) 654-3103 until Monday, Nov 2 @ 3:00pm Central. Suggested donation is $20 or pay-what-you-can. You will be sent the Zoom link in a “Plan Your Visit” email the day before the performance. For any additional questions, please email Director of Patron Services Suzy Robertson at SuzyR@AmericanBluesTheater.com.

American Civil Liberties Union (ACLU) – works to defend and preserve the individual rights and liberties of all.

Chicago Votes – a nonpartisan, nonprofit organization building a more inclusive democracy by putting power in the hands of young Chicagoan.

PHIL OCHS (original songs) was an American protest singer (or, as he preferred, a topical singer) and songwriter who was known for his sharp wit, sardonic humor, earnest humanism, political activism, insightful and alliterative lyrics, and distinctive voice. He wrote hundreds of songs in the 1960s and 1970s and released eight albums. Ochs performed at many political events during the 1960s counterculture era, including anti-Vietnam War and civil rights rallies, student events, and organized labor events over the course of his career, in addition to many concert appearances at such venues as New York City’s Town Hall and Carnegie Hall. Ochs eventually succumbed to a number of problems including bipolar disorder and alcoholism, and died by suicide on April 9, 1976. Some of Ochs’ major musical influences were Woody Guthrie, Pete Seeger, Buddy Holly, Elvis Presley, Bob Gibson, Faron Young, and Merle Haggard.

ZACHARY STEVENSON (performer / music director) is a proud Artistic Affiliate of American Blues Theater. He is an award-winning actor, musician and writer. Originally from Vancouver Island, Canada, Zachary has been coined a “dead ringer for dead singers” by the Victoria Times Colonist for his portrayals of Buddy Holly, Hank Williams, Phil Ochs and roles based on Elvis and Jerry Lee Lewis. In 2018, Zachary won the Jeff Award in Chicago for Outstanding Performance by an Actor in a Leading Role (Musical) for The Buddy Holly Story, a role he’s honed in more than a dozen productions across Canada and the United States. Other acting highlights include Million Dollar Quartet, Hair, Urinetown, Assassins, and Company.  Zachary has produced and recorded five independent albums and tours frequently as a musician. He is also active as a music director on productions such as Ring of Fire and Million Dollar Quartet, American Idiot (upcoming). He is currently writing an American Blues commissioned solo show based on the life of folksinger, Phil Ochs.

We wish to express our gratitude to the Performers’ Unions (Actors’ Equity Association, American Guild of Musical Artists, American Guild of Variety Artists, SAG-AFTRA) through Theatre Authority, Inc. for their cooperation in permitting the Artist to appear on this program.