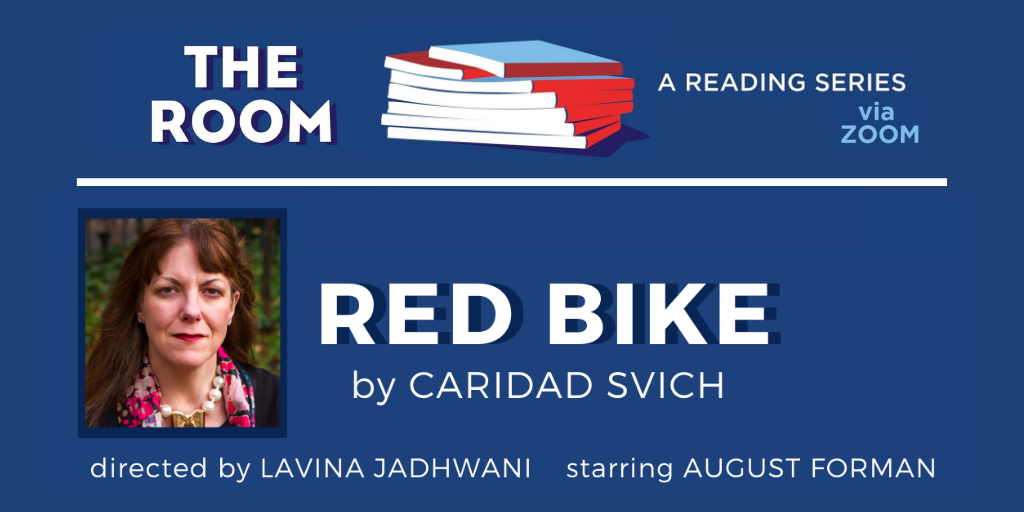 SYNOPSIS: What kind of future will you have living in these here United States? Remember when you were eleven years old and you had a bike, one that made you dream about a world bigger than the one in which you live? This is that memory. Except it is now.

Join us for a powerful, live reading via Zoom. Following the 75-minute reading, stay in our virtual space for a group discussion and share actions you can take. For more information, please read our Backstage Guide in your browser or download pdf.

Tickets are no longer on sale. Suggested donation is $10 or pay-what-you-can. You will be sent the Zoom link the day before the reading and again 1 hour before it starts. For any questions, contact Associate Producer Elyse Dolan at ElyseD@AmericanBluesTheater.com .

NBC5 and Telemundo Chicago’s Coat Drive
This annual coat drive works with Cradles to Crayons — a non-profit organization committed to providing local kids everyday essentials. There are several drop-off locations around the Chicagoland area, or you can buy items off of the Cradles to Crayon Amazon wish list that will ship directly to the organization.

One Warm Coat – a national non-profit that provides free coats to people of all-ages in need, with collection sites across the country, including several in the Chicagoland area.

Toys for Tots – since its founding in 1995, the Toys for Tots program has distributed more than 512 million toys to more than 237 million less fortunate children. This year, they have launched a virtual toy drive, where you can choose the toys you want to donate.

Greater Chicago Food Depository – a network of more than 700 food pantries, soup kitchens, shelters, and other programs in Chicago working to bring food, dignity, and hope to those in Cook County.

CARIDAD SVICH she/her(playwright) is a playwright, screenwriter, translator, editor, lyricist, essayist, educator and freelance arts journalist. Her first independent feature film (as co-screenwriter) Fugitive Dreams, based on her play, premiered at the 2020 Fantasia Film Festival, 2020 Austin Film Festival and the 2020 Tallinn Black Nights Festival. She has received the 2012 OBIE for Lifetime Achievement, the 2011 American Theatre Critics Association Primus Prize for The House of the Spirits, based on Isabel Allende’s novel, and NNPN rolling world premieres for RED BIKE and Guapa. She has also been a Harvard/Radcliffe Institute Fellow, Tanne Foundation Fellow, NEA and Pew Fellow, and Visiting Research Fellow at Royal Central School of Speech and Drama.

Her works in English and Spanish have been produced internationally. Other key plays in her repertoire include Alchemy of Desire/Dead-Man’s Blues, 12 Ophelias, Iphigenia Crash Land Falls, and The Way of Water. A significant body of her work focuses on human and environmental rights and the ‘fragile shores’ upon which many of us live. She also sustains a parallel career as a theatrical translator, chiefly known for her translations of the plays of Federico Garcia Lorca; she has also adapted for the stage novels by Julia Alvarez, Mario Vargas Llosa, Rosario Ferre, and Gabriel Garcia Marquez; she has also radically reconfigured works by Shakespeare, Euripides, Sophocles and Wedekind. She is founder of NoPassport theatre alliance and press and is associate editor of Contemporary Theatre Review for Routledge UK, and is on the board of Global Performance Studies. She is published by TCG, Methuen Drama, and Intellect UK, among others. Her most recent book is on Hedwig and the Angry Inch (Routledge 4th Wall Series). She is currently working on a new book for Methuen Drama, and is in production with her second independent feature film.

She is an alumna playwright of New Dramatists, member of Ensemble Studio Theatre, and an affiliated artist with The Lark, New Georges and Woodshed Collective. She has taught at numerous colleges and universities throughout her career, among them Bard College, Barnard College and Yale School of Drama. She trained with the legendary Maria Irene Fornes for four consecutive years at INTAR’s famous HPR Lab. She was awarded the 2018 Ellen Stewart Award for Career Achievement in Professional Theatre from the Association for Theatre in Higher Education. Visit her at https://caridadsvich.com

LAVINA JADHWANI she/her(director) is a theatre director, adaptor, and activist. Recent directing credits include As You Like It at the Guthrie Theatre, Peter and the Starcatcher at the Oregon Shakespeare Festival, Roe and The Cake at Asolo Repertory Theatre. Directing fellowships include the Phil Killian Directing Fellowship at OSF, the Drama League’s Classical Directing Fellowship at Shakespeare & Company, and the National Directors Fellowship (O’Neill/NNPN/SDC/Kennedy Center). Lavina lives in Chicago, where she was recently named “One of the Top Fifty People Who Really Perform for Chicago” by NewCity; in 2013 she was TimeOut Chicago’s “Best Next Generation Stage Director.” BFA/MA, Carnegie Mellon University; MFA, The Theatre School at DePaul University.

AUGUST FORMAN they/them (performer) is an actor, playwright, voiceover artist, educator, and Trans advocate. Originally from the small town of Tiffin, Iowa, they received their BFA in Acting from Minnesota State University of Mankato in 2014. Since moving to Chicago in the summer of 2014, August has performed with several companies including: TimeLine Theatre; Victory Gardens Theater; Diversionary Theatre (CA); Oak Park Festival Theatre; American Blues Theater; Broken Nose Theatre; Babes With Blades; Metropolis Performing Arts Center; and Midsommer Flight. August received a Joseph Jefferson Award for Best Supporting Actor for their work as “Gina” in Broken Nose Theatre’s production of Girl in the Red Corner. They are a Core Ensemble Member and Facilitator with Imagination Theater, a touring company addressing social issues with young people. They are also an Artistic Associate with Oak Park Festival Theatre. As a playwright, August’s plays have premiered throughout the country.

We wish to express our gratitude to the Performers’ Unions (Actors’ Equity Association, American Guild of Musical Artists, American Guild of Variety Artists, SAG-AFTRA) through Theatre Authority, Inc. for their cooperation in permitting the Artists to appear on this program.